Playing in Keys: The Headache Is Worth It. 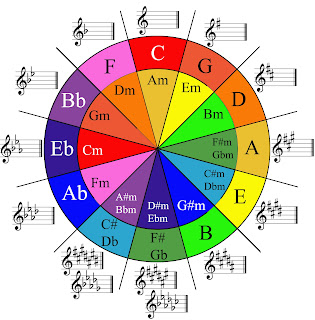 It's summer time (so they say). The piano goes more out of tune than at any other time of the year. I could do a quick unison tuning and that might help but I've been taking to putting in my ear inserts to tone down the sound in this small room I have with my lovely little 'Steigerman' grand piano. For some reason that helps to bear the out-of-phasing of the unison-piano-strings.  It would be nice to have it in tune because I've convinced myself that I need to play even complex songs in twelve keys.

I've been using some precious time to do this. I'm finding it helps in many areas:
The thing is that the songs might be played slower in unfamiliar keys but one rule of thumb is to play musically.  Have articulations, dynamics and beautiful tone uppermost in the mind as the struggle to  play in unfamiliar territory proceeds. I find myself often more 'transported' playing in this way through these keys. In a way the sounds of these keys or at least 'piano keys' will sound new and are worth lingering on in a lyrical manner. In the jazz world (of old and even now) the keys of E, A, B, F# are played much less than the 'flat' keys so there is much territory to be explored. Its nice to be able to play Charlie Parker heads in keys as well and extrapolate phrases and run them through sequential root motion patterns.

I'll follow this article with another featuring one of my favorite and most useful aspects of 7th chord-tones substitution and the pathways that are present when one or more of the chord tone leads to an adjacent chord extension tone—it can contribute to the solo line concept as well.
at June 27, 2012 No comments:
Email ThisBlogThis!Share to TwitterShare to FacebookShare to Pinterest
Labels: playing in keys
Newer Posts Older Posts Home
Subscribe to: Posts (Atom)