Melodic Generic Shapes in Jazz Improv:
A Practice in Discovery 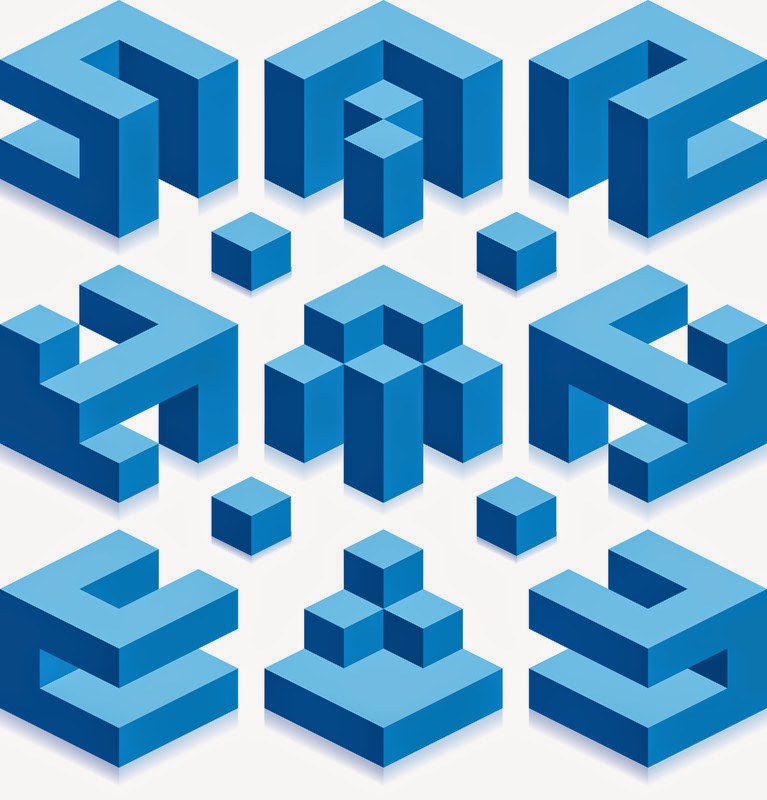 These melodic shapes are documented and championed by Jerry Bergonzi and others. In this discussion, I'll call them Generic Shapes (GS).  They are available in a one octave diatonic scale and can be calculated and practised into improvisation over scales/chords and, over tunes.

Let's say that a GS will have at least three notes, and in fact can be four notes (quite accessible), five notes and even six notes (not totally impractical). I will outline some thoughts I've had for a number of years on this topic over a series of upcoming blogs. There is a lot of detail and understanding to be discussed so it may take a good number of blogs to cover this. A large part of this will be the discovery and application of possible permutations of the original primary Generic Shapes (GS), followed by permutations of primary GS:

The first GS under discussion, since it's the most common and is easy to use, is the four note GS.  There are five unique four note Generic Shapes existing within an octave of a major scale or any seven-tone scale. Using the C major scale and C root as an example, they are the following:

These are the primary Generic Shapes and each can be played diatonically over any scale tone. For example CDEG 1235 has an ascending intervallic shape of major second,  major second, minor third. This same 'shape' could be applied to say: D Dorian 'D' being the 'new 1' with the result: DEFA which has this same ascending shape only the interval quality may be different as in major second, minor second, and major third. It still falls under the umbrella of being a 1235 GS(4). See Figure 1.


It may seem arbitrary but starting with 1235 [CDEG] is a good idea because it abbreviates both the major scale, major pentatonic scale, and, it also establishes a triad chord. A possible first device to be used in the task of finding permutations, is a Basic note order Permutation (BP). It turns out that there are six BP for each of the original primary four note GS. The original primary GS, CDEG, is now reordered five times using the same notes for a total of six BP. See Figure 2.

Six Basic Permutation (6BP) applied to the primary GS4 as in CDEG:


CDEG (prograde-original—BP1) can be reversed to GEDC (retrograde—BP2). The next BP can be discerned by doing an obvious process of every other number as in CDEG becoming: CEDG (BP3) which itself can be reversed (retrograde) to become GDEC (BP4). Making a total of four BP so far. The last two remaining BP can be seen by reordering the original by the only remaining ways available: CDEG becomes CDGE (BP5) and the original retrograde form GEDC is given a similar treatment and becomes GECD (BP6). See Figure 2. 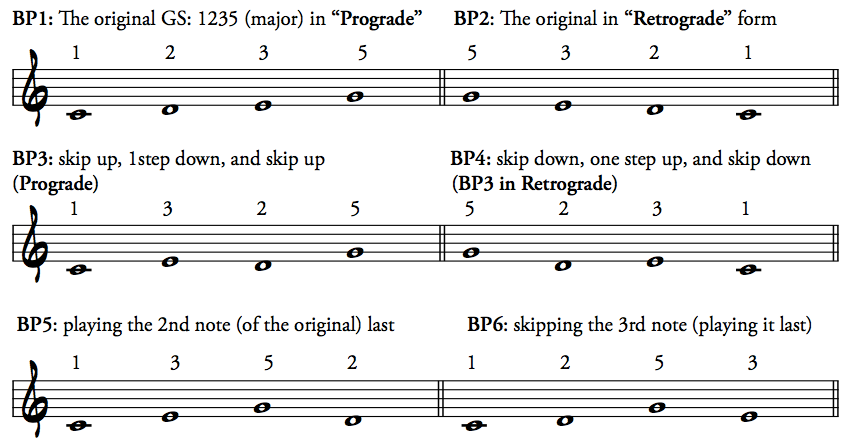 Outlining the above BP (process):


Thus you have six Basic Permutations (BP) of note order.

Now to each of these examples of six BP we can apply the further changes (permutations) to each GS through: inversion (rotation) and staggered rotation (see the list above under the first paragraph of this blog).

Each one of the original GS (CDEG—1235 as an example) will have 6BP x 4 inversions (rotations) x 4 staggered rotations for a total of 96 possibilities. A first step in practising these might include the 6BP to get familiar with. Basic Permutations (BP) are purely about changing the note order in the starting GS. It sounds like a lot to deal with but once the ideas are committed, there could be some possible freedom experiences in that something right and NEW might emerge from this study. See Figure 2 above.


This is a relatively simple process and creates new shapes out of the original.

CDEG 1235 rotated (inverted) once, creates a shape: DEGC (2358) and the new ascending intervallic shape derived is Ma2 Min3 Perfect 4th. By reducing it to it's 'new root tone' D (DEGC) this new shape can be easily thought of as 1247 (Ma2 Min3 Perfect 4th) reckoned from D. In Figure 3, I take this generated GS and impose it on the original root C (CDFB) to get a clearer comparative view.  See Figure 3.

Thus, from the 4 'rotations' of CDEG (1235), the new shapes 1247 (CDFB), 1367 (CEAB), and 1456 (CFGA) for a total of inclusively: 4 GS through an inversion/rotation process (R). See Figure 6 for a summary of these 4 shapes created by the inversion/rotation of on GS (1235 in this case). All the generated rotations are imposed over a C note as the bottom note. Truly it is the Rotation shapes that serve best as a basis for permutation because once these are learned and learned as transferable (C1235—D12b35 etc.) GS, the application of BP and SR (staggered starts in rotation) can be applied as they are gradually learned.

N.B. If one takes into consideration the 6BP applied to each one of these 6BP x 4R there are 24 individual yet strongly related Generic Shapes (GS).

The next application of permutation emerges when the rotations (R) are given staggered starts (S).

This additional device (GS4 x 6BP x 4R x 4 SR) creates the rest of the potential 96 GS permutation possibilities with four notes. It is simply a process achieved by staggering the start of a single rotation, for example 1235 can be started on successive notes in the shape: 1235, 2351, 3512, 5123. This same idea can be applied to the other rotations of our example: DEGC can be started in a sequence of staggers on the same shape. DEGC EGCD GCDE and C(octave up)DEG.. and so on. When BP (6) and R (4) and S (4) are multiplied the potential numbers of GS is 6BP x 4R x 4S = 96 possibilities. See Figure 7. 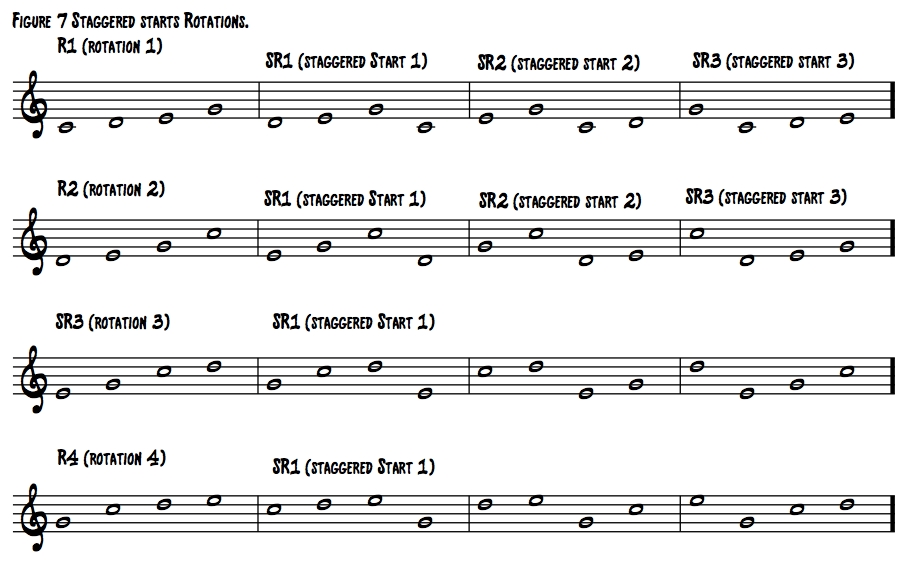 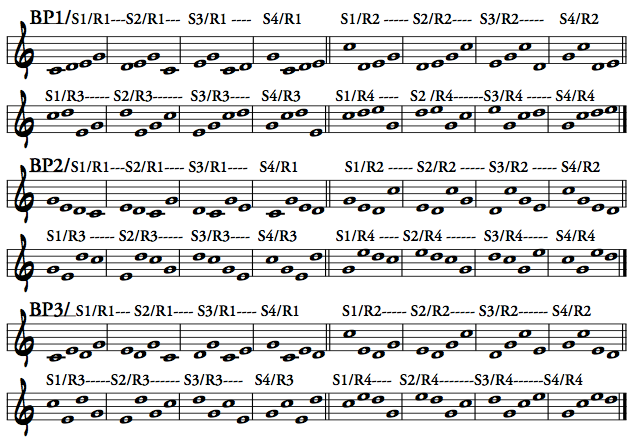 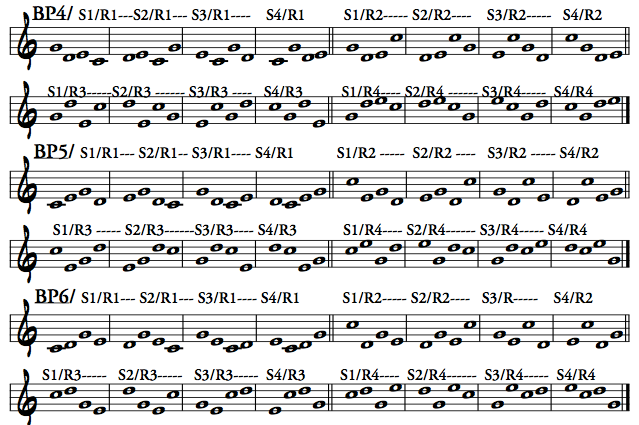