from Chapter 32 of An Approach To Jazz Piano


If G7/mixolydian is the most inside dominant 7th chord/scale in C, G altered dominant has the most notes out of the key of C that a G7 can have while still retaining a dominant 7th quality (see Figure 2).

Before outlining directional intent in secondary dominants, it is necessary to discuss the primary dominant (G7 in C major) in order to establish a working order of dominant scales.  This working order of dominant scales will include those that are more inside the key and will progress incrementally to those that have a more outward direction. Even if the order is only loosely defined it should benefit the thinking behind scale choices when improvising and composing. A problem that many beginning improvisors have is that there is no graduation of dominant scale choice used.

As a result, many improvisers often play either mixolydian for an inside dominant (mistakenly in the secondary dominants of III7, IV7, VI7 and VII7) or go directly to the altered dominant scale. As a result, the more inside scale choices are never really explored, and understanding and expression can be limited.

When working with dominant harmony, the two extremes of the inside-the-key and outside-the-key direction respectively as stated, are the dominant scales of mixolydian and altered dominant. All the other dominant scales between those two extremes, use combinations of altered extensions, and, have a more or less defined order of “in-ness” and “out-ness” of a key by virtue of the notes in those chord/scales that are in or out of that key.

The looseness of definition arises from the fact that “inside” notes like 9 can be combined with altered extensions like #11 and b13. The same is true of the 13 (an “inside” tone) which can be combined with b9, #9, and #11. This is where the term: “color” in melody and harmony comes in to play (see figure 32-5). In a dominant chord, the 9 and/or 13 can be considered: “bright” (or neutral) and are inside the key. Altered tones of b9, #9, #11, and b13 are often considered “dark” and create an intensity, and, have a tendency to move.

Figure 3 (32-3) outlines a proposed order for an inside-to-outside order of dominant 7th scales. The example used will be a G7 which is the primary dominant of C major. 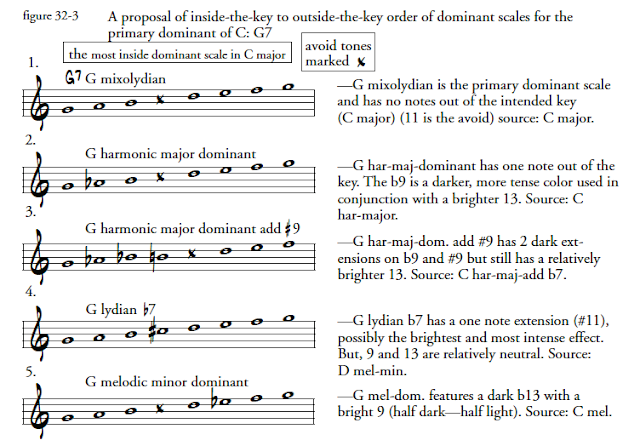