Secrets of the Sound: S1 used in Chord Progressions.

The Sound One (S1) in chord progressions, used exclusively to create that jazz piano (or guitar, or arpeggiated for horns) sound:

I once ran a showcase band at MacEwan, and was getting into some arrangements that called for this S1 sound. I was working with a very interesting go-to-kind of guy on guitar in the band. He didn't know how to voice a G7(#9#5) chord per se, but he knew how to voice dominant 13 chords. So I asked him on the spot to play a Db13 chord / G bass and lo and behold we had the asked for G7(#9#5) chord voicing.  He was surprised but realized that basically, he already had voicings for altered dominant chords which were virtually the same as V13 chords a tritone away.  I was prompted to tell him this, because I had been working this "Sound" thing and that was an action that came out of that study.  So why do this and not stick exclusively to the "normal" extension replacement of seventh chord tones (9 for 1, 13 for 5 etc.)?   Because with the "Sound" there is a built in system for adding color and urgency in a seventh chord in an incremental way.

This blog will deal with S1 in progression in a parallel motion without much voice leading. Inversions and voice leading will be an open topic in future blogs on this "Sound" topic. The change in color from V13 to V7(#5#9) represents the most radical change in color and vertical tension change possible in a V7.   Future blogs on this topic will deal with the graduations of vertical (chord) tension between these two essentials. Primarily these voicings are thought of as left hand comping (rootless) chord voicings, but they can be played as in the right hand too as part of a comping framework and, they can even be a point of departure/arrival in improvised soloing.

Just using the S1 chord (Ma7[b5]) for convenience, these C major and related A minor progressions emerge and are used here as a set of examples. These examples are played in the right hand with the appropriate root in the left hand.

(NB The Sound is used in all three of these voicings)

(NB The Sound is used in all three of these voicings)

I like to learn these in all keys keeping track of voice-leading line movement and inversion to inversion through these progressions.

I experiment with these progressions by sometimes reversing the V7(#5#9) with bII7(#5#9) it does make a difference. I hope you'll try it
at November 24, 2012 1 comment:
Email ThisBlogThis!Share to TwitterShare to FacebookShare to Pinterest
Labels: altered dominant, G7(#9#5), S1, The Sound, V13

Secrets of the Sound: Intro and Connections to the Bebop Cliché.

I'm putting together a series of blogs on "The Sound," a voicing idea with some connected but divergent paths creating transformations of chord quality and chord progression.  In this introduction the concept of the Sound is introduced, as well as how it naturally interrelates with the bebop cliché.

The basic Sound has been heard in jazz piano for over half a century now and we all know it so well it is often referred to as the "Stock 13" chord. I first learned it from the guys I was playing with in the 1960's and heard more about it from a jazz piano book series by John Mehegan, who featured it in what he called A and B voicings which used Fma7(b5) as an example of a G13 chord. The A version was this closed voiced chord in root position and the B version was the second inversion of that.  This particular voicing was described by my friend Mike Nock, as "The Sound" ...heard all over the world where and when jazz was played.  Mike is an Australian (originally from New Zealand) jazz pianist who was visiting Grant MacEwan's music program in the eighties.   He was giving a talk about it.   Of course it was already being taught in our courses there and it was affirming to hear Mike speak of this voicing in this way.  There was a second sound Mike mentioned where the A note in this sample voicing FMa7(b5) was lowered to become (with a G bass) a G13(b9) or, as a stand alone voicing, FDimMa7.

That did get me thinking, Sound 1 (Fma7(b5)) and Sound 2 (FDimMa7).  I did have some conversations with a local brilliant pianist (who will remain nameless for now) about this and over a period of time I was able to piece together a strategy to help to explore Tonality through to Chromaticism.  This was a method of adding more color to a V13 chord in an incremental fashion, with some linear considerations like the bebop cliche.

First of all, the voicing itself, using FMa7(b5) as an example, is used to create the familiar but still enchanting V13 chord as in: 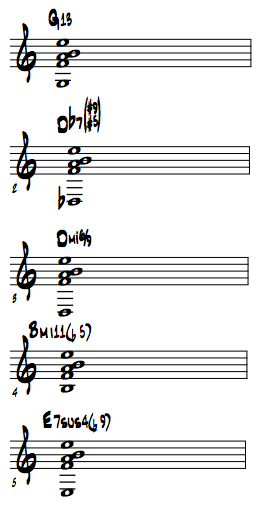 Here are other commonly played chord qualities using FMa7(b5) with other roots:

Integration with the bebop cliché.

The bebop cliché could be described as a moving chromatic line between chord tones—specifically in V7: 5—b5—4—3 and variations but it is essentially that.

The chord shapes used are named to be descriptive as to their function. It's the drill that many have practised but in order to facillitate a hierarchy of tension/color, I'll reiterate a few basics:

G13—I6/9 using the Sound as notated above would be

We interpolate the related iimi7 of V13:  Dmi9—G13.  Using this Sound method of description we call the iimi9 chord PS1 or the Preparation of Sound 1, i.e. FMa7/D = Dmi9.

For an increase in harmonic rhythm, the bebop cliché is introduced into this progression as another interpolation (which means basically that all the additional changes occur in the same amount of time as the original V—I).  The purpose of this extra harmony is to introduce some additional elements of tension and release into the progression. The iimiMa9 implies the V7/ii and spins out some extra energy to the iimi9 chord before it resolves to the V13 chord (The bridge to Confirmation [Charlie Parker] is a good example).  The bebop cliché in the progression example goes like this: